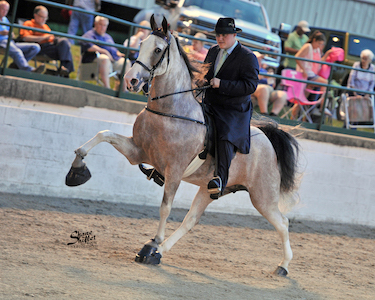 Reserve world champion Jammin’ For Keeps recently passed away at Cedar Tree Farms. Affectionately known as Jammin,’ the talented mare was sired by Cash For Keeps and out of Strawberry Jam. She found show ring success at young age and maintained that success for over a decade.

Under the direction of Chet Mills, Jammin’ would reach the pinnacle of her career claiming top honors at the prestigious Columbia Jubilee and the title of Reserve World Champion at the 2016 Celebration. With 17 blues and 20 reserve finishes, very few of her show ring peers could match her sustained success.

Not only was she successful in the show ring, she was also a producer of champions. Her first foal Walkin’ & Jammin’ inherited her mother’s striking good looks and used them to capture the titles of Futurity Champion, World Champion Weanling filly and Reserve World Grand Champion weanling. A working mom, Jammin’ took home honors at the same Celebration; leaving her filly’s side only long enough to compete herself.

A truly special animal. Jammin’ will not soon be forgotten by her fans and especially by those of at Cedar Tree Farms.