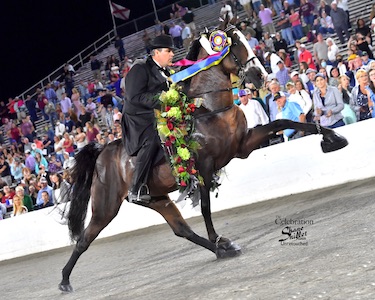 He was a affectionately nicknamed  “Lurch”  because of his size and methodical movement based on the butler character from the Addams Family TV show. This nickname was extremely popular with his fans who would wait patiently at shows and exhibitions just to get their picture made with Lurch, some being lucky enough to take a spin on him.

Born on May 17, 2009, this beautiful bay stallion was bred and raised by Alan, Lorie and Lilly Riddley of Shelby, North Carolina. He was sired by the 2007 World Grand Champion, Master Of Jazz and out of Dazzle Me Dumas. Even at an early age the Riddley family knew that this young stallion was something special. “He always had a presence about him,” recalls Alan. He remembers it taking  almost three years to break the enormously proud stallion who would go on to have a show career extending nine years and 70 successful show ring appearances with nine different riders; all of whom were successful with their ride on the gentle giant. Alan stated, “I always believed in Lurch, even through the down times. He was a horse of a lifetime!”

Lurch started his show career at the age of three under the direction of Herbert Derickson of 4 The Glory Farm. The duo made several shows together during his three and four-year-old seasons. During his five-year-old season, the Riddley’s decided to sell Master’s Razzle And Jazz.

In 2016, while under the direction of Brad Beard and owner Laura Mauney, the gorgeous bay stallion won his first Reserve World Grand Championship in the Trainers’ Ride for the Roses class. The following year Alan made the decision to bring Lurch back into the family.

Mid-season of 2020, Alan made the decision to move Lurch to Callaway Stables with John Allan Callaway  taking the lead as head trainer. This combination was the perfect fit  and proved to be an undefeated  dynamic  team. John Allan and Lurch provided one of the most memorable performances by capturing the 2020 World Championship and World Grand Championship titles.

Following the Celebration, Lurch was asked to make special exhibitions at the Kentucky Celebration, the National  Trainers’ Show, the  Alabama Jubilee  and The Celebration Fall Classic. His last exhibition trip would be to the Abernathy/MWHA Preview earlier this year where kids and adults both waited in line each day to take a ride on the  2020 World Grand Champion.

John Allan said, “Lurch was a once in a lifetime for me. He gave me everything he had when I asked for it. His absence isn’t just felt in our barn and family, but by everyone in the industry, especially the kids that loved him. I’m grateful to have had the opportunity to work with such a giving and true Walking Horse.”

During the fall of 2020, it was decided that the next step in this 11-year-old stallion’s life was to head to the breeding barn. His future certainly was looking bright. The Riddley’s selected Rising Star Ranch and David Williams to oversee the next chapter of Lurch’s life. Williams stated, “We are very saddened at his passing. I had high expectations for what he would produce. His sire has been one of the highest percentage show horse producers. His dam had also produced WGC Epic. This Fall will be bittersweet seeing his offspring and knowing this will be all we will have from him. We loved the big guy and appreciated our association with him and the Riddley’s.”

Following a routine workout on Thursday,  February 4, the  Callaway Team noticed that the stallion wasn’t quiet himself. After a preliminary examination the decision was made to transport Lurch to Rood & Riddle  Equine Hospital in Lexington, Kentucky, with symptoms of colic. During the surgery, the surgeons at Rood & Riddle discovered the damage was too severe from the colic and they could not save him.

The Riddley Family would like to express their deepest appreciation for your love, support and encouragement throughout the years. In addition, a heartfelt thank you to Callaway Stables for their love and great care for Lurch. Never before has our industry had such an ambassador that any child or adult could enjoy as they did with Master’s Razzle And Jazz.

He was truly a once in a lifetime horse for the Riddley Family, who will greatly miss this gentle giant that was loved by all.